If you are a Danube bicycle traveller in Bulgaria, the town of Nikopol should be one of your stops during your cycle journey. It’s not only because the upcoming hilly terrain to the next bike stop (the tillage of Vabel), with it’s long centuries of history, Nikopol has few interesting places to visit it. One of them – the Shishman’s Fortress and it’s Gate is such a interesting site from our Dunav Ultra Cycle Route .

The Nikopol Fortress and today’s Shishman Gate is most often related to the Bulgarian ruler Tsar Ivan Shishman (reign 1371-1395). During his time, the Turks besieged and captured Turnovo (the Capital of Bulgaria at this moment), which effectively put an end to the Second Bulgarian Empire and the common Bulgarian statehood.

Shortly before the siege of Turnovo, Ivan Shishman left the city and settled in the fortress of Nikopol. There he spent the last two years of his life, meanwhile accepting to be a vassal of the Sultan. The facts show that in 1395 he has beheaded under the command of Bayazid I, because of suspicions of riots, talk, and treason.

The legend carries that the verdict is executed just in front of the so-called Shishman’s Gate, but the fact is look like more folklore than reality. It is true, however, that for the whole history of Bulgarian statehood, Ivan Shishman is one of only three Bulgarian rulers killed by a “foreign” hand.

A miniature of Ivan Shishman

Today’s area around the gate, which you will encounter in Nikopol, was built long after those troubled times. Interestingly, the original gate was dismantled and transferred to the city of Pleven at his Regional Museum of History. The Gate in Nikopol looks real (on the title photo), but it is not – it is an exact copy of the original.

The medieval fortress itself in Nikopol was an exceptionally defensive facility – its location, design and construction itself were implemented in such a way that virtually impossible to capture an object. For the first time, the fortress was mentioned in written chronicles in the XI century, and in the centuries later it was attacked and besieged unsuccessfully by various rulers. 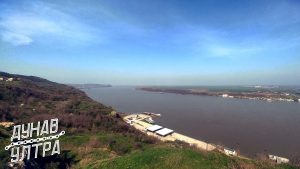 The View over the Danube from the Nikopol fortress area

Its partition was finally decided a few hundred years after its creation, and during the Russo-Turkish War (1806-1812), when the Russians were operating on the Danube and withdrawing from the field of action, they decided to blow it out so that it could no longer be restored.

Nowadays almost nothing remains of the Nikopol fortress, except the foundations of several stone walls overhanging the steep hill where a high wall of wall towers.

However, the site where the fortress was built is extremely specific, accessible and you can clearly see how important strategic importance the site had before, during and after the end of the Second Bulgarian State.

Just one recommendation from our team. Leave your bicycle at the nearest hotel. The road to the fortress area is short but extremely high, so it would be much better for you if you chose to go there by walking instead of cycling.